How to Limit SSH logins by Country on Ubuntu 20.04

One very nice way to hide your SSH login from would-be attackers is to hide it. If you have been following along this guide, we have done several things to hide it, but we can (and in my opinion, should) do more. After all, the fewer chances you give someone to get lucky, they better.

Here we will look at the IP addresses of people trying to SSH in, and allow or block them based on what country those IP addresses belong to. Of course, this is not going to help if someone is using a VPN with an IP address from a country you allow, but it is one more layer of security. Are we going overboard here? Maybe, but we have watched some of our servers get attempts from hundreds of thousands bots using ip addresses from China, Iran, Russia, etc. over the years. Wouldn't it be better is they didn't get a hit, alerting someone there was a server to attempt to break into?

For quite some time, there was a very easy way to do this using a binary called geoiplookup by MaxMind. Unfortunately, in 2019 they ceased to support it, but they still have the service to keep an updated IP database on your server to use for checking for valid IP numbers by country. Better yet, a developer/blogger named Ralph Slooten created a script to replace the one published by Maxmind. His tutorial on installing the script can be seen here, but it makes some assumptions that may make getting it up and running a little difficult, so after asking him a bunch of questions, we got it running, and are sharing what we learned here. 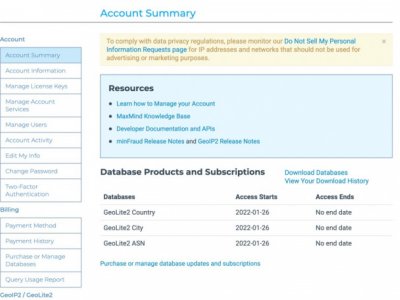 You will now see your new license key. It will look something like this:

Copy this info and store it somewhere safe. You will need this during this tutorial and in the future.

You can now close the browser.

This is the program that will download database updates with new data for IP lookups. MaxMind provides a PPA for recent versions of Ubuntu. To add it to your sources, run:

Next we need to edit the configuration file:

Now we need to quickly execute it to download our first database:

Next we need to create a cron job so the database updates automatically:

You will be asked to select an editor. Choose #1 (/bin/nano) and hit [ENTER]

At the end of the file enter the following:

To begin,, this tutorial assumes your server is on an AMD64 architecture, but let's make sure:

If not, you may need to make some changes as appropriate in this step.

First, open a web browser and go find out what the most recent release is of goiplookup. Again, many thanks to Ralph Slooten for this!

At the time of this writing, the current version is 0.2.3, and as mentioned above, I am using a VPS running Linux with AMD64 archtecture. So the file I want here is:

If you see a newer version, in the steps ahead replace goiplookup_0.2.3_linux_amd64.bz2 with the filename you see on the github page. For all further examples, I am using version 0.2.3.

Give it permissions to execute:

And move it to it's final home!

Now let's make sure it is working:

You should see the following output:

* Note: the filename will be different if you downloaded a different version.

As mentioned earlier, this script was made by Ralph Slooten , and thsi tutorial is adapted from his tuorial here. He helped me with some of the questions I had that prompted me to write this more extensive tutorial.

He wrote a simple shell script which returns either an true (ACCEPT) or false (DENY) response. If the result is DENY, it logs to the system messages using logger.

So let's create the script:

In the file, paste the following:

Whichever countries you want, you will want to use the two letter ISO country code(s), which can be found here.

If someone tries to SSH into your server using an IP for which the country cannot be determined, this script will allow it in, since it cannot tell. This allows internal IP addreses on your local network to get in.

Next, we need to make our script executable:

Before doiing this, make sure you have two terminal windows open just in case you make a mistake or something does not work. One terminal should be logged in and left to the side in case of emergency, and the other logged in for the work we will do now.

We will now tell the ssh daemon (sshd) to deny all connections, assuming a login cannot get in until our script says it is ok. We do so by editing our hosts.deny file.

and add the following line:

Next we need to edit our hosts.allow file to force it to run the script to see if a user is allowed in:

and add the following line:

Again, make sure you have two windows logged in. We don't want to lose access if this does not work.

Go back and edit sshfilter.sh:

Now take your country out of the list of allowed countries.

Now open a new terminal window and try to ssh into your server. If you are on an ip number that is not listed in the allowed counties, you will noit be able to connect.

To double check and see what happened, you can look for the denial in your logs. Go back to the terminal that is still connected to the server, and enter the following:

IMPORTANT: Now that you are done, go back and add your country to the allowed list !!!!

Add your country back in.

and go open another terminal window and make sure you are able to SSH into your server!

Now every time someone tries to SSH into your server, they will automatically be rejected if their IP is known to be from a country you do not allow. Additionally, every month, your server will update the ip database from Maxmind. On top of this, if you followed the previous steps, your SSH is on an ambiguous port, you have Fail2Ban set up to protect you, and you have some pretty good firewall protection. Remember there is no such thing as a server that cannot be hacked, bugt by this point you are a very, very difficult target not only to hack, but to be found.

Warning: While it is great that you can lock people out by country using this method, remember that this is just one in many layers of security to use. This method can be easily thwarted if someone connects through a VPN in a country you allow. Still, they would need to know you are blocking based on country, so this will surely add a nice extra layer to make things more difficult.